Paul Seidel is a Video Content Producer & Voice Over Artist at The Big Mouth Media Group.

Other people mentioned in the show:

Products and software mentioned in the show:

Brands mentioned in the show:

Welcome to the Improve Your Workflow podcast brought to you by Digital Pigeon. Learn from other creative and media businesses about attracting more work, delivering projects efficiently, getting paid on time, and everything in between.

Hi there, and welcome to the very first episode of Improve Your Workflow. My name is Paul Evans and I'm your host. Our format for this show is really simple. I interview owners and managers of media and creative businesses about their productivity and operations hacks as a way where we can all learn from each other and hopefully make our lives that little bit easier. The episodes are designed to be quick and something that you can listen to on your commute or whilst you're at the gym. With that in mind, let's start the show.

Our very first guest on the Improve Your Workflow podcast is Paul Seidel. Welcome to the show, Paul.

Thank you very much.

So to kick off the show, could you please tell the listeners what you do and who you do it for?

Yeah, fair enough. So what would you say is your number one productivity hack? Whether it be selling your services or delivering your work, or maybe something that helps you on the business side of things?

It's funny, when I look at that question, I think, how do I answer it? Because I sort of don't use hacks so much as I think it's the way that we deal with our customers and our clients. The one thing that we've always had, whether it has been video or audio, is we work quick and we communicate everything along the way. We don't just sort of work quietly in the background and if something's going to be late we don't do this thing of like, oh just don't tell anyone, because you can't, because people rely on you. As much as you work in sync with other people, you really have to just communicate with them.

Now, I know there's things like Slack and Yammer and all those kinds of things. We don't really use that. We've used Skype sometimes to communicate with people, so you might have a bit of a paper trail if you like. But, to be honest, I think it's just, mainly for us it's emails and it's phone calls as well because it's nice to actually hear the other person at the other side of things as well. We like to come and visit our clients occasionally when we can get, even though we're based in Melbourne, sometimes we do sort of travel around because it's nice, again, to see people.

Cool. And could you tell us a bit about your tech stack, about you know, what you do to get your job done?

Okay, so in terms of hardware and things like that, and software, we use Cubase for audio. We use Adobe Audition because that's really good for batch processing because we often end up having a lot of files, especially with our e-learning narration where there could be like 30 or 40 different files which we've got to convert. So that's always handy.

We use Premiere Pro for video, Sony camera gear for our shoots. We're looking at getting a Mavic Pro 2 drone very soon. So there's all that kind of stuff. But also we have a ... sometimes, when we've got to employ somebody else to help shoot for us, because, you know, you can only have so many hands, and so a mate of mine, James Anderson, has started a company called Shootzu and it's really good because it helps connect people. Like if you might be looking for someone to be your second shooter for a wedding, you put this ad up there at no cost and it will connect you with all these people who are qualified and there's insurance and all that kind of stuff. So for me that's really good because I don't have to think about it. That helps speed that process up because I know I'll get someone who will be able to do what I need them to do without having to explain everything from start to scratch, you know? So that's really good.

So I think those tools are really good, and at the moment I'm actually working on a documentary on a guy called Andrew Follows, who ... this is a bit of an unusual one, he is a sight-impaired photographer. So he basically has ... one eye doesn't have vision, the other has tunnel vision. He shoots with a Nikon D850 camera, it's a beautiful camera, and he shoots the most amazing things. He worked at the Commonwealth Games in 2018, got to meet Prince Charles. He shot at the Olympics a few years ago. He's done all these different things.

He's basically, I'm constructing a documentary on him because he's actually going through the throes of cancer at the moment and so I'm documenting his life. And the best thing about Digital Pigeon, coming back to you guys, because I have to mention it, that when I start doing drafts of some of the like miniature videos that I'm doing, like I'm doing a one or two minute video that sort of goes online for his social media and the Austin, where he gets treated, is that I can just upload it to Digital Pigeon, give them the link and I don't have to clog up my own hard drive or Dropbox or anything like that. I literally just go, here's your link, download it, watch it online. Tell me what you think.

So, I think digital pigeon, ultimately, coming back to it, it is our best tool that's central to what we do. Because now that we've got NBN, the uploads go really quick.

All right. If you could work with one brand that you don't already work with, who would that be and why?

Do you know what? We've worked with so many different brands through what we've done, it's really hard to nominate one particular company because a lot of the times, say with the narration, which is based on online training and e-learning, we work with a lot of developers and they tend to work with a lot of the multinationals. So we've done stuff with Qantas, we've done stuff with Westpac, with A&Z, with Queensland Rail. In video we work with people like Forward and KPMG and things like that. So we're sort of, we're getting to get the pick of the bunch. Even though I'm sure it'd be nice to work with everybody, you can't spread yourself too thin because then it's impossible unless you've got a company that is of 50 or 60 people. And to be honest, we're a much smaller business than that, but we have, like I said, that personality of being able to talk to our clients and it's good that we get to talk to these people and sometimes you get access to things that you don't get access to.

This episode is brought to you by Digital Pigeon. Digital Pigeon is the leading file sharing service for creative and media businesses that can't afford to miss deadlines. With a focus on moving large files from A to B quickly and reliably, Digital Pigeon is the tool you can count on where others fail to deliver. Try Digital Pigeon out for free today at www.digitalpigeon.com/workflow for an extra-long 90-day trial. Now back to the show.

So Paul, how do you go about solving problems that you don't know the answer to?

Google. It is for me, in a way ... like not to say that you ever stop learning, because if you say you stop learning, I think that's the worst part because then you think you know it all but you don't. Sometimes it helps to reach out to people you know, sometimes it helps to go onto forums. The other thing I use a lot is Whirlpool, which is a really good kind of like everything thing. More so like say we've got a VOIP phone system and if something goes wrong, it's always hard to get support from the people who make the phones because they're overseas and it's the wrong time zone. And generally, if it's not Google, it's somewhere on Whirlpool that someone's gone oh I've done this, or I've done this.

The only problem with forums is that sometimes you can put something on there and people will go, "Oh look it up on Google." Or they'll say, "Don't you know," ... people assume that you know everything and that for you to come onto a forum and ask a question that it's like, "Why are you even doing this if you have to ask the question?" That's the downside of those kinds of things, because people all across the world, everyone's got a different personality, and unfortunately people apply that, and sometimes the internet doesn't always transmit emotions. Like you might say something in one way, but it doesn't always come across because dot, dot, dot after something might just mean, come on, answer the question, or it might mean there's your answer. So it's kind of, it's the interpretation sometimes.

So, yeah, Google as a basic search. The only thing I find issues with, and I love Apple because we've had Apple when we dumped PCs years ago, that sometimes when you try to use multi-users with things like Apple Watches and then iPads and everything, it's a minefield. It's so hard to get an answer. I can go into an Apple Store and go, tell me how to fix this and they'll go do that, do that. Nope. Didn't work. You know, so they can be ... good, good and bad things about that.

So great insight there, Paul. Finally, where can our listeners connect with you?

We're on Instagram @BMMdigital, and that's where we put a lot of our videos up. The only thing that I find is something that I'd love to have more access to is some of the work that we do. I'd love to publish it more to the world, but a lot of its either internal training or it's internal communications, which we love doing, but we can't spread that around to the world. We put as much as we can up there because it's nice for people to come along and go, "That's what you do." Plus we're just about to walk into the world of drones, so that's going to be another thing that we would love to showcase and let people know about. So that's the best way to get onto us.

Great stuff, thanks for being on the show, Paul.

Well that brings us to the end of episode one. For me personally, my biggest takeaway from Paul was to constantly communicate with your clients and keep them up to date at all times, and don't be afraid to pick up the phone. Tone doesn't come through in emails or online forums. Until next time, keep on delivering.

Thanks for listening to the Improve Your Workflow podcast. If you enjoyed the podcast, please leave us a review on iTunes. Go to www.digitalpigeon.com/reviewpodcast/ for more info and we'll add you into our monthly draw to win a Digital Pigeon T-shirt. Bye for now. 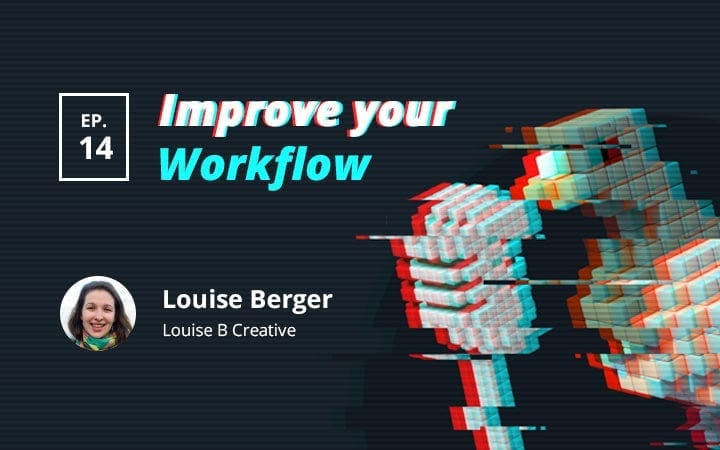 Louis Berger is the Creative Designer of Louis B Creative, a design studio based in the Mornington Peninsula, her clients consist mostly of purpose-driven, non-profit individuals and companies and social enterprise. 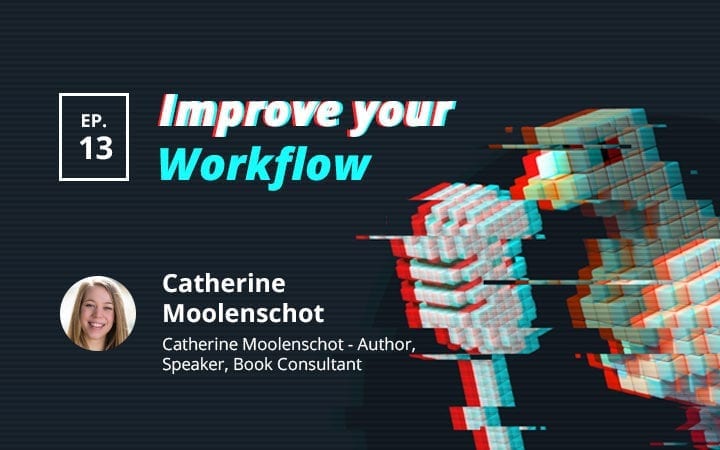 Catherine Moolenschot is an Australian author, ghostwriter and book writing mentor who helps professionals write their own books. 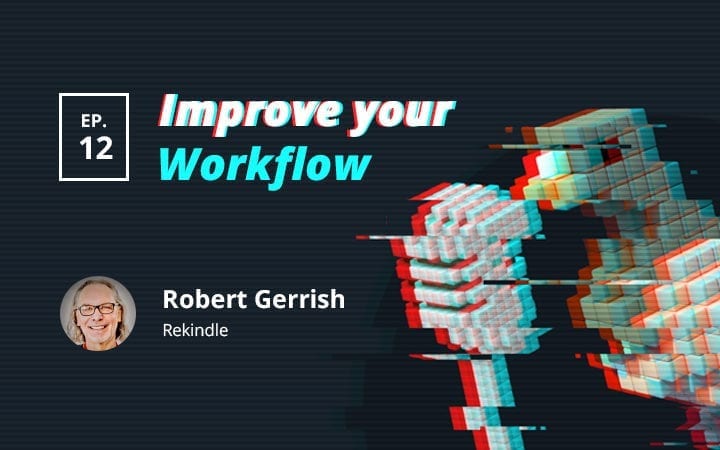